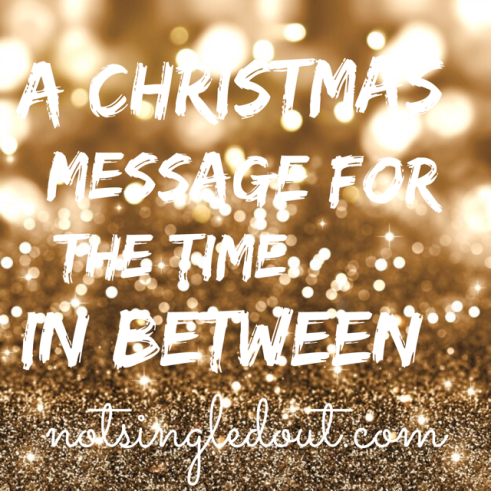 When only God was listening, what did you ask for for Christmas? Perhaps it’s something more recently added to your waiting on Jesus list or maybe it seems like it’s been gathering dust for a decade. The Christmas season has a way of creating spaces to slow down and contemplate. For some of us, these reflections can threaten to cast shadows over our Christmas cheer if we dwell too long on what we don’t have in our seemingly endless holding pattern. This is where I found myself a couple days ago, and as Providence would have it, my reading plan brought me to this spot in Scripture:

“Let these words sink into your ears: the Son of Man is about to be delivered into the hands of men.”

The passage stood out because when Jesus says “Let these words sink into your thick skull”, I feel like what He’s about to say might be important. It’s a passage that finds Jesus’ followers in their own “time in between.” They are waiting for Jesus to make His move and rescue Israel from its oppressors. They have a plan and expectations, and so this statement leaves them scratching their heads. To provide some context, the passage before describes a time when Jesus casts out a demon from a young boy. The response from those gathered at the scene is found in verse 43: “And all were astonished at the majesty of God.” The scene that unfolds after Jesus’ plan-foiling pronouncement offers a glimpse of the disciples’ pride in fighting over which among themselves was the greatest.

The manner in which Jesus’ statement is sandwiched in between two seemingly unrelated episodes offers a very realistic scale of two extremes that we teeter in our own “time in between.” I often find myself in awe of the good things God has brought about in my life. Life experience is routinely more sweet than sour if we were to make an honest list of pros and cons. I woke up this morning, that sunset over the beach is incomparable, and my mom’s advice is seriously the best…all acknowledged as gifts from God’s creative hand. And yet, at the drop of a hat, I can become extremely disgruntled when I start to think about my wonderful plans for my life that God doesn’t seem to be on board with. Yes, God, all these gifts are great, but have you even been listening to my prayers? Singleness, health issues, broken relationships, [fill in the blank] has never been on my Christmas list. Want to know the root of that attitude? Probably not, but I’ll say it anyhow. Pride. Ugly, icky, I know better than the King of the Universe pride.

We aren’t so different from the disciples that traveled the dusty roads around the Middle Eastern countryside, following the unpredictable Messiah from town to town a couple millennia ago. And Jesus’ abrupt message is the same to us in our predicament, only (glory!) past tense: “Let these words sink into your ears: the Son of man was delivered into the hands of men”….then He died, taking on your sin and then conquered evil and death by rising 3 days later. He lived, He died at the hands of His creation, then He rose to live so that we can, too. No more simply being in awe- now we get to know Him in deep communion. And as for pride, we continually take it to the cross to remind ourselves of the beautiful work of humility that set us free. Our joy, especially at this time of year, rests on our fight to actively let these truths sink in, as our Blessed Redeemer commands.